Last month I posted about the then-current results from the ATLAS and CMS detectors at the LHC hinting at a possible new particle around \(\unit{120-150}{\giga\electronvolt}\). But in light of new data presented at the 2011 Lepton-Photon conference in Mumbai, we’re not so sure about it anymore.

Take a look at these plots from the ATLAS and CMS experiments, respectively: 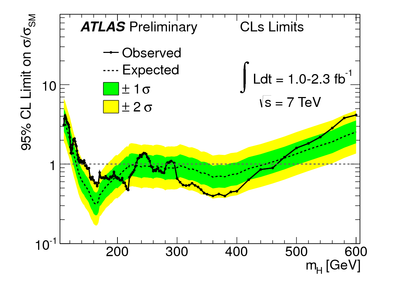 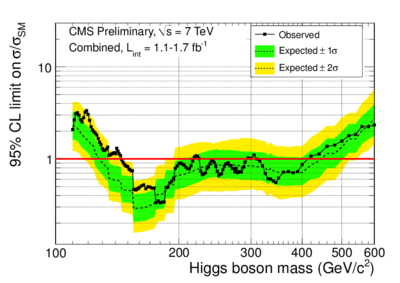 The solid line in each plot represents the observed data, and the dotted line represents the expected background, which is basically the theoretical prediction based only on the stuff we already know to exist. The yellow band shows the \(2\sigma\) confidence interval. In other words, if there is nothing left to discover within this energy range (in particular if the standard model Higgs does not exist), there’s a 95% chance that experimental data falls within the yellow band.

When I displayed the equivalent plots from EPS HEP-2011 in my post last month, I pointed out that the interesting features were a couple of small regions where the solid line rose above the yellow band. Looking at the newer plots, you can see that that’s no longer the case. The experimental results are starting to look more consistent with the hypothesis that there is no Higgs boson there. Of course, it’s not a huge change, just from \(2.8\sigma\) to about \(2\sigma\), but it does generally make sense to put more trust in the result that is based on more data.

So what does this mean for physics? For starters, it does not mean that there is no Higgs boson, and it does not mean that the standard model (which has been in development since the 1970s) is ruled out. These data only address the simplest possibility, namely that there is a single Higgs boson. If that doesn’t work out, there could be a set of multiple Higgs bosons, and in that case physicists would have to go back and reanalyze the data. It’s even possible that the LHC is not powerful enough to detect any of these multiple Higgs bosons. And even if we are able to completely rule out the Higgs, there are other mechanisms for creating mass that could fit into the standard model. Technicolor in particular is starting to attract attention, but personally I’m reserving judgment on any of these possibilities. Bottom line, we just don’t have enough data to say anything with certainty.