The Hadron Collider Physics conference is nearing its end now, and that means one thing: Higgs results! The LHC collaborations have just presented their updated measurements of the Higgs boson candidate whose discovery was announced in July, based on the \(\SI{7}{fb^{-1}}\) of new data that was collected in late summer.

I’ll jump straight to the punch line: what they see is mostly consistent with the new particle actually being a plain old standard model Higgs boson (although it’s not absolutely confirmed yet). Which is kind of disappointing, because it indicates a lack of exciting new stuff to discover. Back in July when the discovery of the particle was originally announced, there were some slight discrepancies between the results obtained by the experiments and the predictions, and a lot of physicists were hoping that was a hint at something new and unexpected, but it’s looking more and more as though that is not the case.

Anyway. On to the results. As in the original announcement, ATLAS and CMS are searching for the Higgs in five different channels: they’re trying to detect five different sets of particles that the standard model Higgs boson can decay into.

There are others, but they’re either too rare or too difficult to detect to be useful. Both major LHC experiments, ATLAS and CMS, presented their results separately for each channel that has new measurements, so I’ll go through them one by one.

Higgs decay into two photons is probably the cleanest channel to look for the particle: not much of anything else produces two photons, so any time you find a photon pair (diphoton event), as long as the two photons aren’t entirely unrelated, it’s likely to come from the Higgs.

Neither ATLAS nor CMS had anything new to present here, because they haven’t finished analyzing the data on diphoton detections from the late summer run. We’ll have to wait for another couple months or so to see the new \(H\to\gamma\gamma\) results. At this conference, they just re-presented the same analysis from July (click on a plot to go to the presentation it comes from): 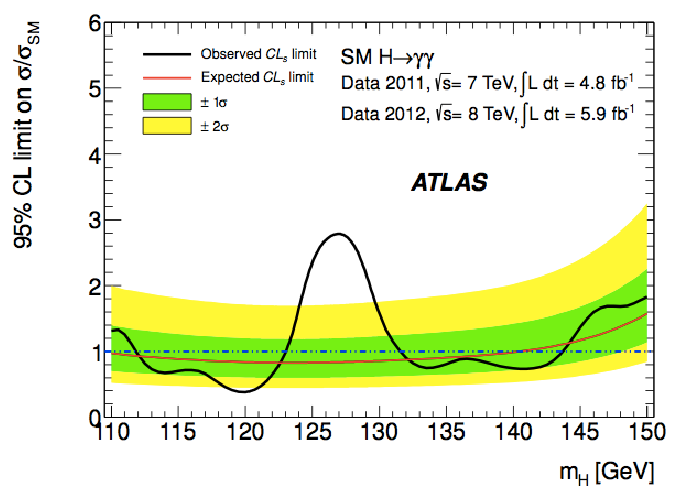 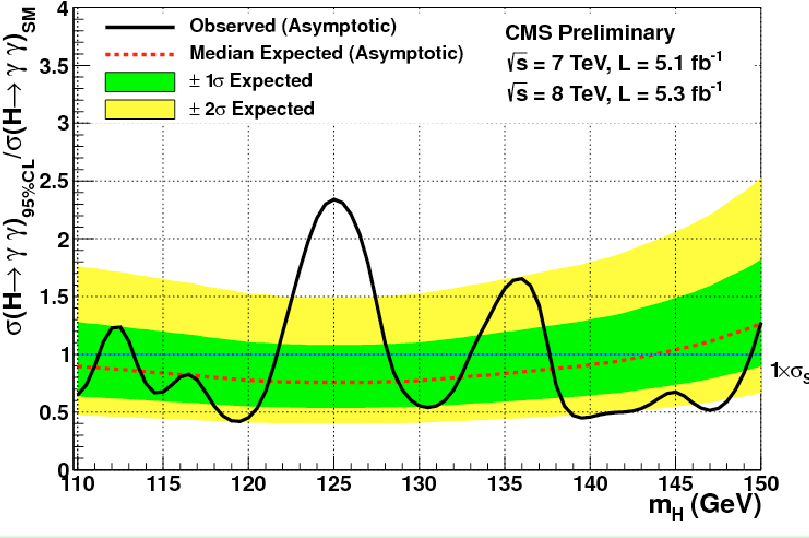 As those in the business would say, ATLAS is seeing a \(3.6\sigma\) signal, or more precisely that it has excluded the standard model background-only hypothesis at the \(3.6\sigma\) (global) level, corresponding to a p-value of 0.00032. This means that there’s only a 0.032% chance that ATLAS would have measured as many photon pairs as they did if there were no particle there, and the standard model (without a Higgs) was all there was. CMS has excluded the background-only hypothesis at \(3.2\sigma\) (global), corresponding to a p-value of 0.0014, so that’s a 0.14% chance of the measurement being a fluke. (Some day I’ll do a post explaining p-values and sigmas in more detail, and perhaps also global vs. local, which has to do with the look-elsewhere effect — as in, look elsewhere if you want to know about it :-P)

I’ll definitely be looking forward to seeing the new results from this channel, because in the presentation at ICHEP in July, the number of photon pairs counted was a little more than what would be expected from the standard model. The difference wasn’t enough to be inconsistent with the hypothesis that the particle is the standard model Higgs boson, but it did raise some eyebrows, and for people who really wanted the boson not to be the SM Higgs (that’d be all physicists, at least a little bit), it looked like a potential first hint. However, every other channel is looking more and more like the standard model Higgs, so I have my doubts that the excess in this channel is going to turn out to be anything significant.

The \(H\to WW\to ll\nu\nu\) channel has a high branching ratio, which means it occurs fairly often, but it’s somewhat difficult to detect because you can’t actually ever record the neutrinos, and thus it’s contaminated by the decay of Z bosons or photons into lepton-antilepton pairs. ATLAS and CMS get around this by looking for pairs of different-flavor leptons, i.e. a muon and positron or antimuon and electron, or by checking for the missing momentum carried away by the neutrinos.

ATLAS has analyzed their entire set of 2012 data, but without combining it with the 2011 data, and the results confirm what was announced in July, but with a slightly higher significance (sigma): they are now seeing a signal at \(2.6\sigma\) (global or local, I’m not sure), a p-value of 0.0093. They’ve made some improvements and tweaks to their analysis, in addition to acquiring more data, but the tweaks are fairly minor so I’m not going to mention them here. Click through to the presentation if you want to see the details. 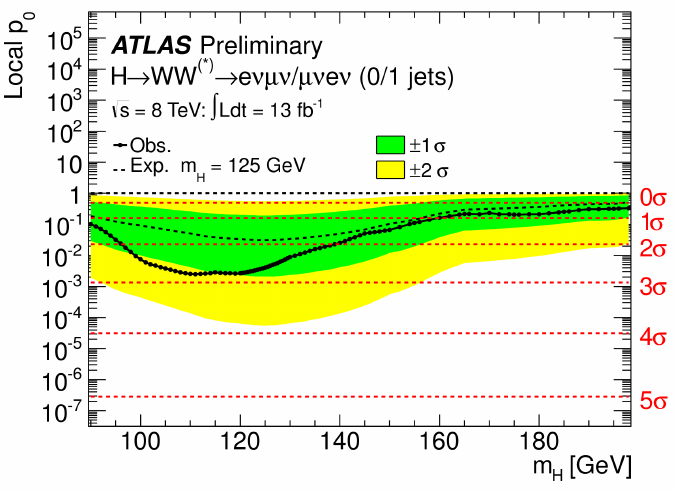 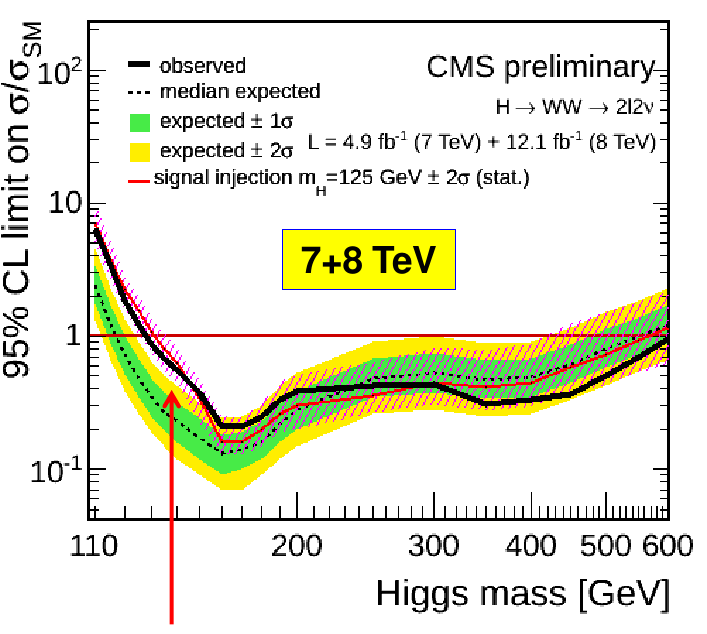 Meanwhile, CMS has produced a new analysis involving all the data they’ve measured in both 2011 and 2012, which takes into account not just the numbers of \(ll\nu\nu\) groups detected, but also the distribution of the directions they come out in. Overall, they are now seeing a \(3.1\sigma\) signal (local I think) in this channel alone, corresponding to a p-value of 0.0019.

The four lepton channel, \(H\to ZZ\to 4l\), is sometimes called the “golden channel” because, like the diphoton channel (above), not much of anything other than a Higgs boson decays this way, and it’s easy to pick out correlated pairs of a lepton and antilepton of the same flavor. Unfortunately this too is a rare decay, and so the detectors find themselves working with very few events.

In another repeat of the diphoton channel, ATLAS had no new analysis of the four lepton data (slackers!), only the same result from the July conference: a signal with a local significance of \(3.6\sigma\), and a corresponding p-value of 0.00032. But they did offer this fantastic portrait of who I’m guessing is Peter Higgs, from Anthony Morley’s talk on ATLAS \(H\to ZZ\) results. Or should I say The Great Higgsini? 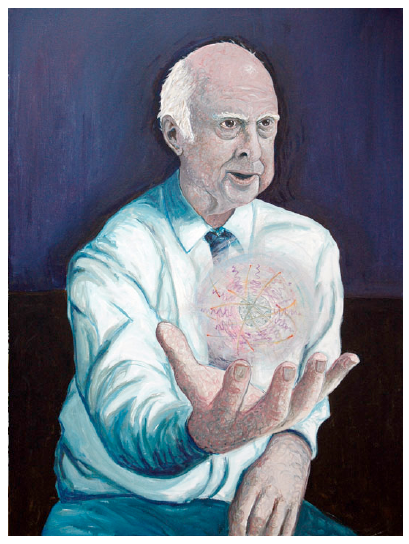 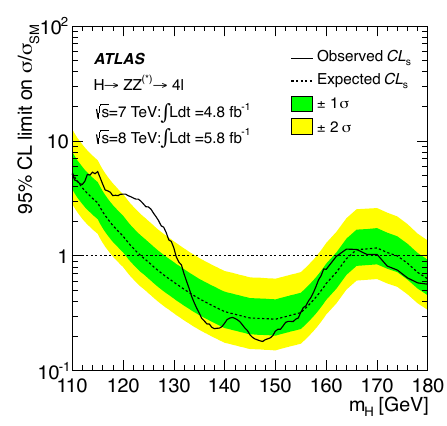 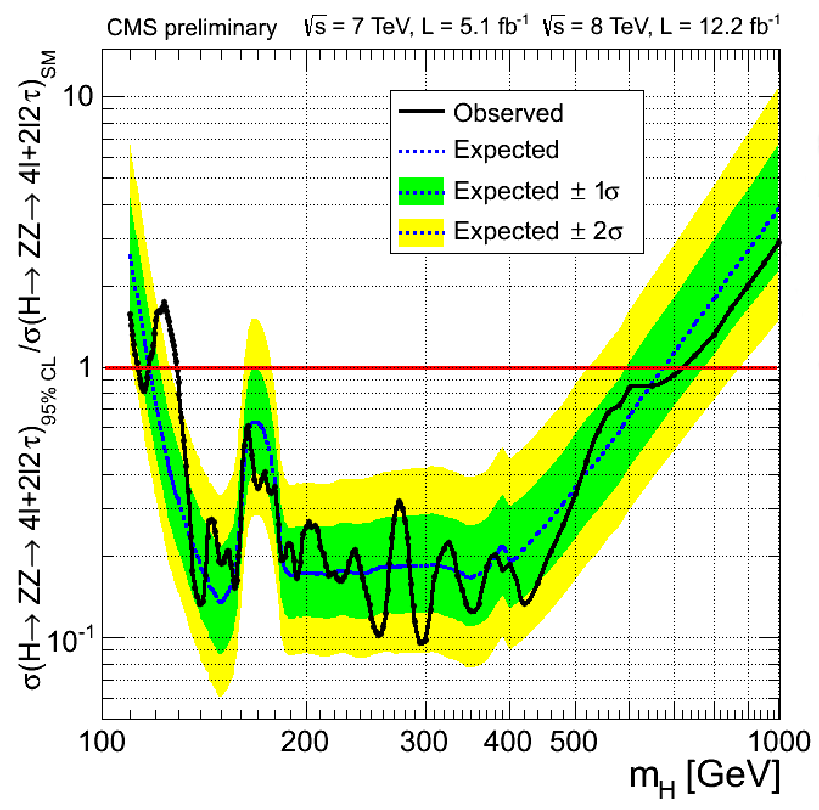 There’s another very interesting analysis allowed by the \(H\to ZZ\to 4l\) channel that CMS has now started on: they’re looking at the spin and parity (intrinsic properties) of the new particle. This goes beyond just confirming that the particle is there (which is solidly established) and trying to figure out whether it actually seems to be the standard model Higgs. All this is explained with pretty pictures in a nice post on Quantum Diaries, so I’ll skip the detailed explanation and just show you the result: 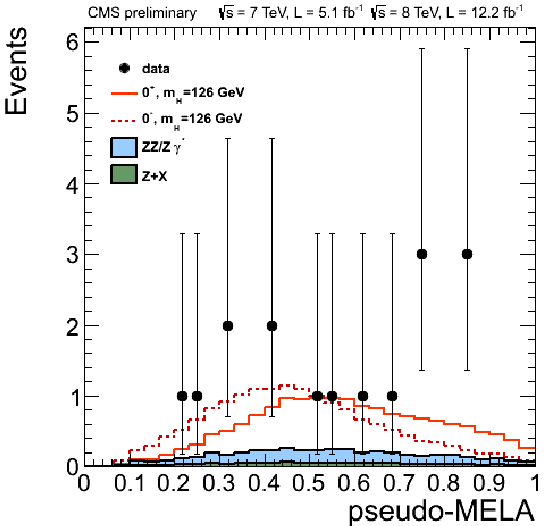 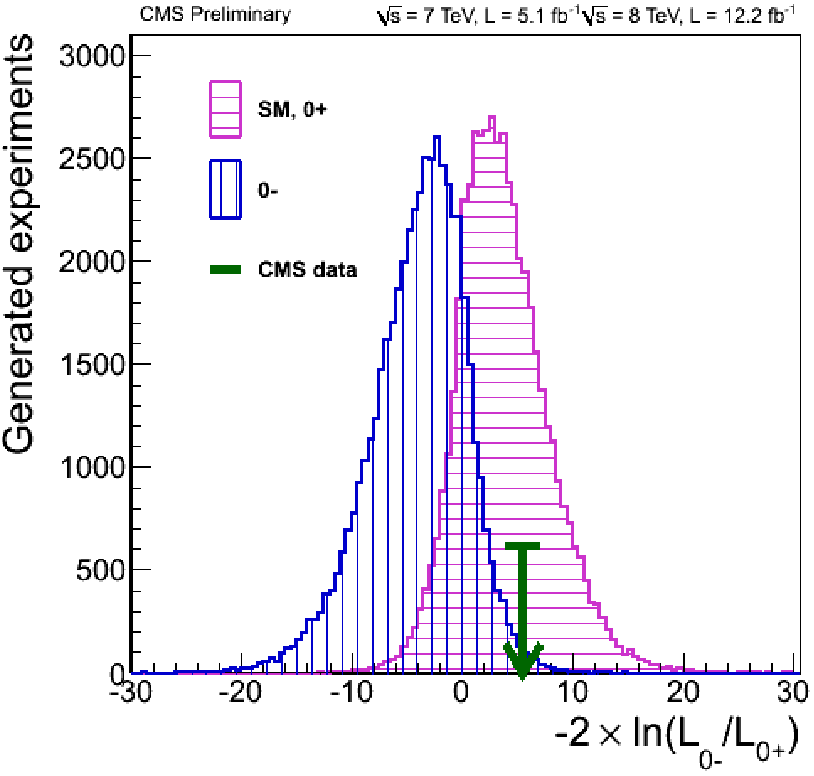 The plot on the left shows the data, along with two curves, one for spin zero and even parity, and one for spin zero and odd parity. As you can tell, it’s not going to be easy to figure out which curve matches. But when you look at the plot on the right, it’s a little clearer that \(0^+\) is a better match than \(0^-\). It’s far from definitive, though; the odd-parity case is “excluded” (not really) at \(2.45\sigma\), while the even-parity case is “excluded” at \(0.53\sigma\). Neither of those is anywhere close to the \(5\sigma\) needed to claim a clear measurement. This is another measurement to watch out for in future results, because if the data don’t turn out to match the expected properties of the standard model Higgs, \(0^+\) (spin zero, even parity), that would be a fantastic sign of new physics.

Here’s where the results get really interesting. In the July announcement, ATLAS and CMS reported that they saw fewer \(\tlp\talp\) pairs than expected, enough so that their number was actually closer to what they’d expect if there was no particle than if there was one. In the lingo, we say the result was more consistent with the background-only expectation than with the discovery hypothesis.

In their latest result, the problem is partially fixed: the number of \(\tlp\talp\) pairs detected by ATLAS is about halfway between what they would expect based on the Higgs boson’s existence and what they would expect without it. But these two expectations are themselves fairly close together, and the measurement is still not precise enough to distinguish between them. 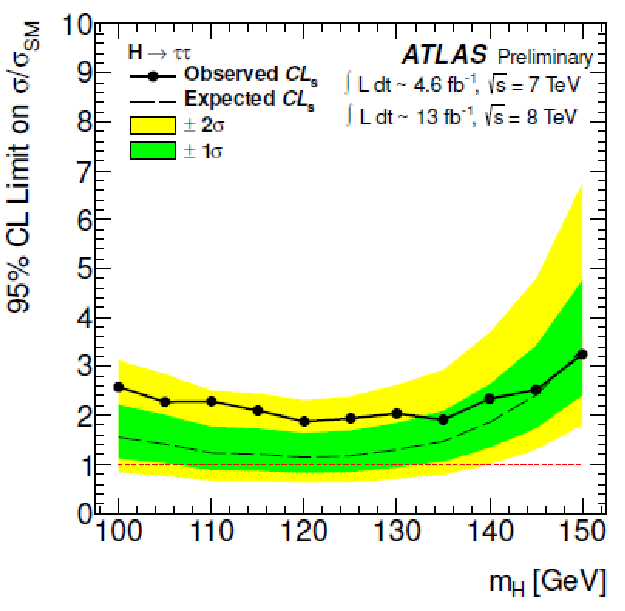 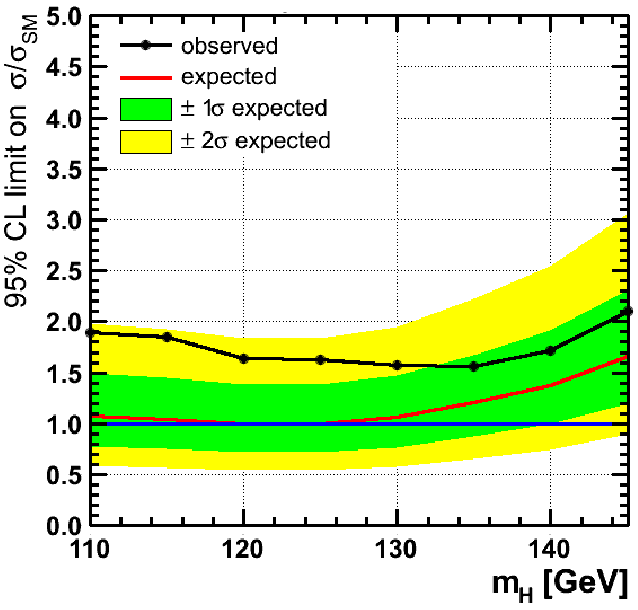 The background-only expectation is only excluded at \(1.1\sigma\) (local) for ATLAS, so there’s a 27% probability (\(p = 0.27\)) that a statistical fluke would have generated the signal they see, and \(1.25\sigma\) (local) for CMS, \(p = 0.21\). That’s not very significant. Based on the data collected in the other channels, I suspect that this is going to wind up agreeing with the standard model Higgs prediction as well, but right now it’s just inconclusive.

Finding a clear signal in the tau-tau channel, in other words conclusive evidence that the \(H\to\tlp\talp\) decay does happen, would be a major deal for the same reason it’s important to determine the parity from the four lepton channel: it helps establish that the boson is in fact the Higgs. Right now, the only ways we’ve definitely seen this particle decay involve spin-1 particles, and those could have come from a spin-0 boson, like the standard model Higgs, or a spin-2 boson, which would be entirely unexpected. However, opposite-spin lepton pairs like \(\tlp\talp\) can only come from spin-0 particles. So if this decay mode is detected, it’ll be definite proof that the particle has spin 0, making it appear a lot like the Higgs.

Finally, the results for \(\btq\btaq\) pairs are qualitatively similar to those for \(\tlp\talp\) pairs. ATLAS has analyzed their combined 2011+2012 data in this channel, and finds consistency with both the background-only expectation at \(p = 0.64\) — that’s a very high 64% chance they would see what they did if the Higgs candidate does not decay to b quarks at all. CMS, on the other hand, has numbers which favor the SM Higgs slightly, but they only exclude the background-only hypothesis at \(2.2\sigma\), or \(p = 0.028\). 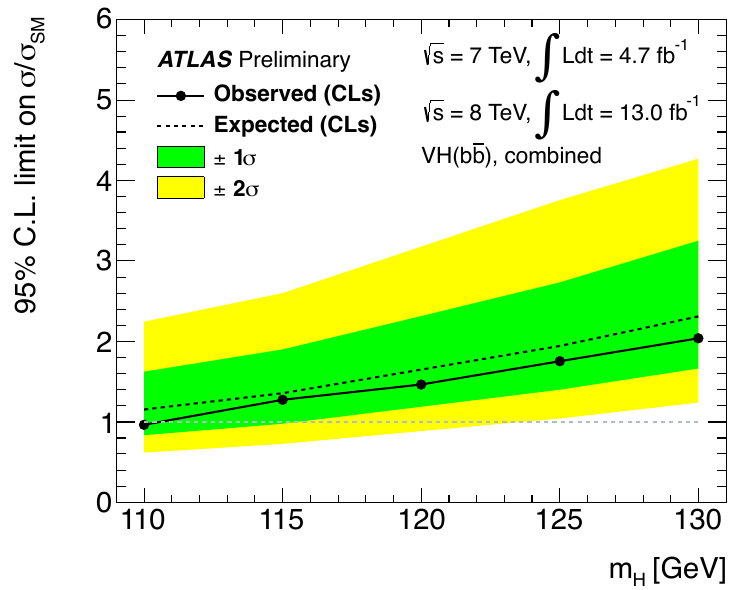 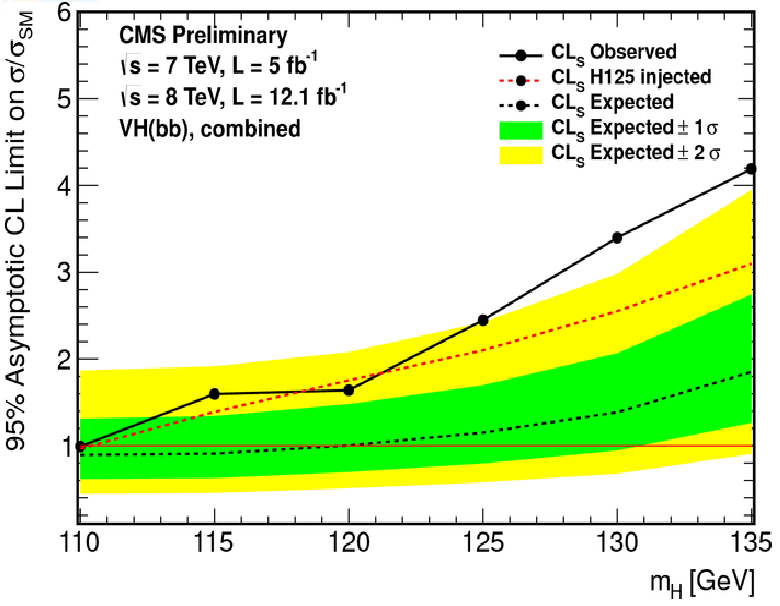 However, in this case the Tevatron might be able to come through, at least a little bit. CDF has a dedicated b tagger which can pick out the jets produced by b quarks, and they also have a lot of data to work with and plenty of experience analyzing it. Both CDF and D0 have been analyzing their data to squeeze every last bit of information out of it, and this summer they were able to come up with this: 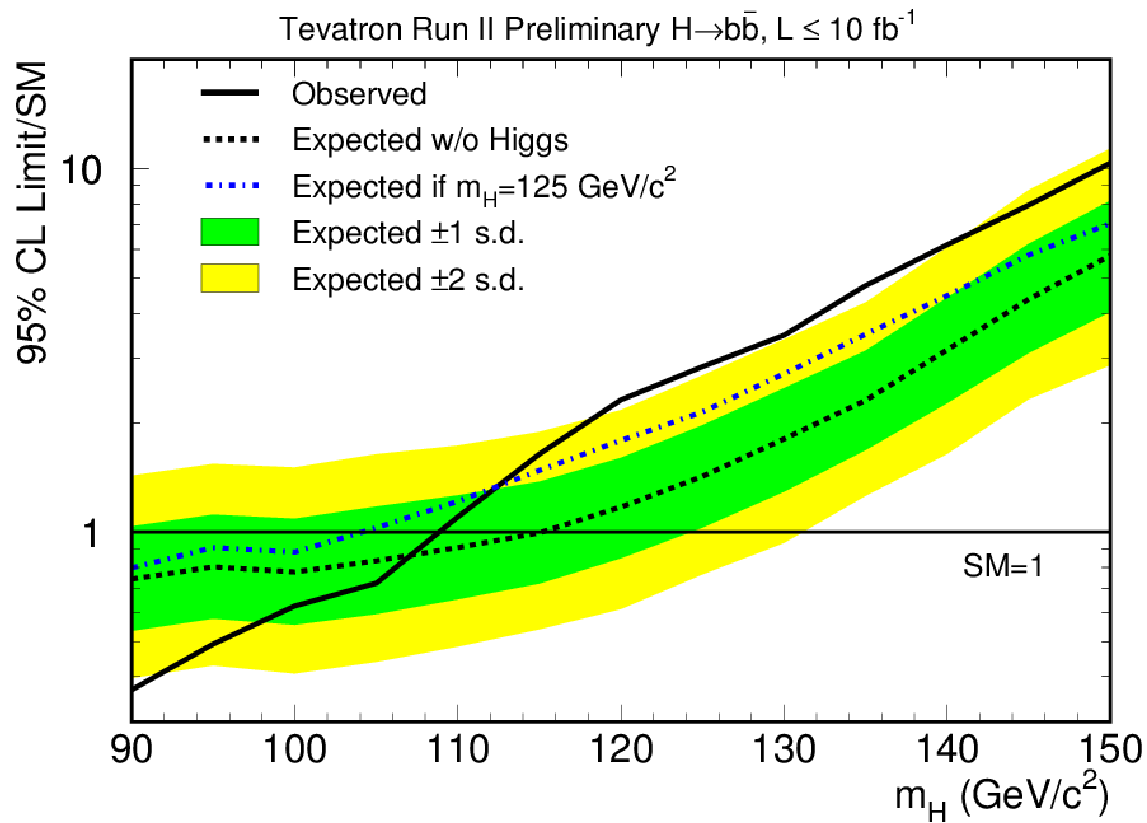 They’re seeing a slight excess, just over \(2\sigma\), that corresponds to the mass of the Higgs boson candidate. It’s not nothing, and actually more of an effect than the LHC experiments are seeing right now, but still, hardly conclusive. Admittedly this channel isn’t as clear of a signal for the spin or parity as the last two, because bottom quarks are produced along with all sorts of other junk like gluons, but it’s still important to check because even one definite discrepancy from the SM Higgs prediction means that we could potentially have a new particle on our hands.

When you put all the results together, CMS has a \(6.8\sigma\) signal, corresponding to a \(\num{5.2e-12}\) chance that this discovery is a fluke. ATLAS seems not to have released an overall significance, probably because they only had new results in a few channels, but still, those few results have increased statistical significance relative to July. Hooray, the particle is even more discovered than ever before! The more important point to take away is that it is increasingly looking exactly like the standard model Higgs boson, based on how often each of the different decay channels have been observed, but there are a couple of decay channels that are still holding out, so we’ll have to stay tuned!