Phys.org has picked up on the results from the LHC pilot pA run showing the formation of The Ridge in high-multiplicity collisions. I wrote about this last month, when it was first presented at the High-pT LHC Physics Workshop in Wuhan, and at that time, the sentiment at the conference seemed to be that it wasn’t clear what could be causing the ridge. 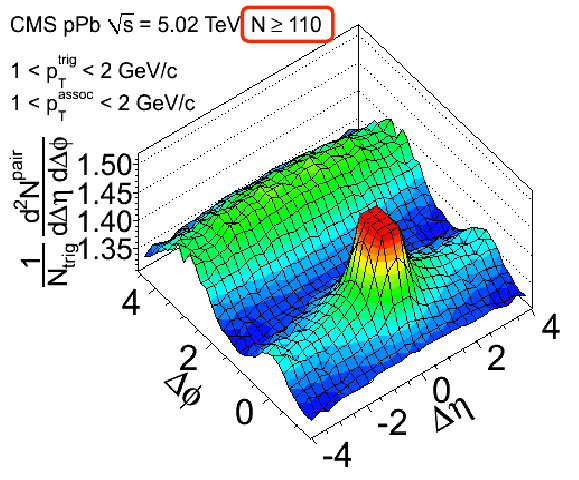 Now, people are starting to lean toward the color glass condensate (CGC) as an explanation. The CGC has been called a new state of matter, which probably isn’t the worst description, but I think that makes it sound like more than it is. It’s a model that predicts the behavior of gluons within a proton or nucleus, under conditions in which the gluons are so numerous that they regularly “bump into” each other and fuse, or “recombine” to use the technical term. (That’s an extreme oversimplification, of course; perhaps someday I’ll do a post explaining this in more detail.) This model predicts some correlations among gluons which might be able to explain the ridge. But it’s not at all clear yet that that is the case. The LHC didn’t produce enough collisions to be able to compare the data with the theories and be confident that one or another is exclusively correct. So it’s rather premature to be talking about a new state of matter. All we know right now is that there is an effect in need of an explanation.