WELCOME READERS OF THE FUTURE!! (with ominous echo) In all seriousness, I wrote most of this from the Beijing airport yesterday, but without internet access I couldn’t post it until I got to the conference. 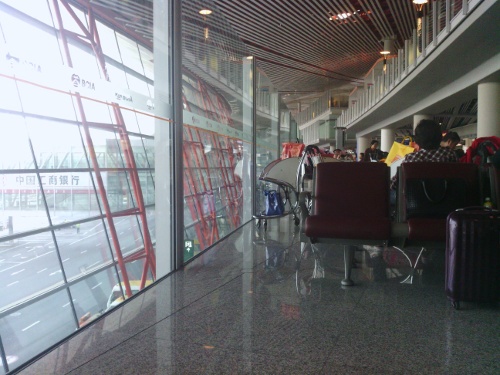 First impression of China: it doesn’t seem that different from the US. Classical music plays over the speakers in the airport. Signs are pretty much bilingual everywhere, or even English-only (although to be fair, a lot of those are actually made-up Western name brands that don’t mean anything anyway). And seeing a bunch of Chinese people walking around speaking Chinese doesn’t feel even a little bit strange. This is a testament to just how many Chinese students have swarmed into American higher education. It’s only when I look around for the corresponding groups of white people and Indians — and don’t find them — that it really starts to become evident that I’m in a foreign country.

Oh, and another thing: unlike what you might hear (in the US) about China being a “police state,” the police and security officers in the airport really don’t seem to be taking their jobs more seriously than they have to. It’s a stark contrast to all those sullen TSA officers and constant reminders of “If you see something, say something” and “Our safety is your priority” that I got before leaving the US. Who’s Big Brother now, huh?

Anyway, I’m already looking at some interesting new results from the LHC’s pPb pilot run, so stay tuned for another blog post on that soon.

Also, KFC needs to start making shrimp burgers in America, because they are super-delicious.