Sit back, close your eyes, and think all the way back to… last week, when physicists from the LHC experiments presented their latest results on the Higgs search at the Rencontres de Moriond Electroweak session. Yes, I know, we barely had time to digest those results. But digest we must, because this week there are even more new results coming out, from the Moriond session on QCD and High Energy Interactions. And what the experiments have presented today is, rightly or wrongly, turning a lot of heads.

The key update from today’s presentations is a measurement by ATLAS of the cross section for the Higgs decaying to two W bosons, which each then decay to a lepton and a neutrino: the \(H\to WW\to ll\nu\nu\) channel. It comes on the heels of a similar measurement presented by CMS last week. Both detectors are now reporting that they measure a strong signal for \(\ell\bar\ell\nu\bar\nu\) detection beyond the standard model (without a Higgs boson) at \(\SI{125}{GeV}\), with a significance of \(4.0\sigma\) at CMS and \(3.8\sigma\) at ATLAS. In other words, if the particles of the standard model, not including the newly discovered Higgs candidate, were all the particles there are, the probability that each detector would measure what it did is less than a hundredth of a percent. 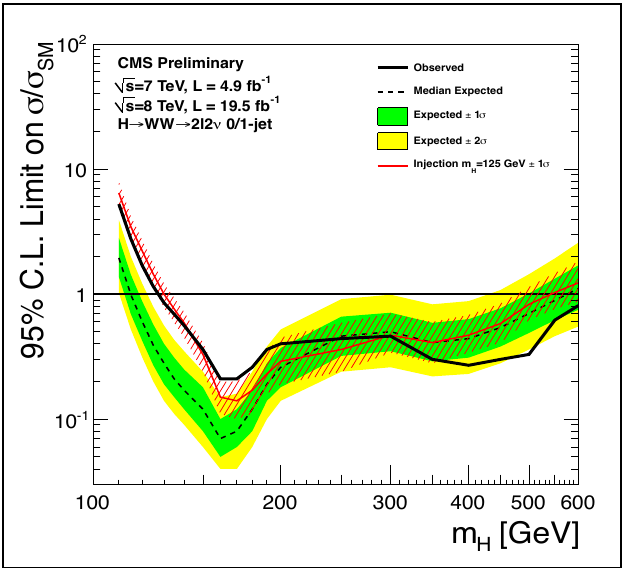 Compared to the last batch of Higgs search results, when ATLAS was only detecting a \(2.6\sigma\) signal and CMS a \(3.1\sigma\) signal, this is a significant improvement indeed. (Pun intended, if you got it!) As far as I know, nobody has combined the new results from ATLAS and CMS to see just what statistical significance they get when put together, but if they did, it would likely be above the “mythical” \(5\sigma\) threshold in this channel alone. Plainly put, that means we are now effectively certain the newly discovered particle decays to W bosons.

OK, so why is that so important? Well, the whole reason the Higgs boson was predicted was to allow the W and Z bosons, the carriers of the weak force, to have mass. It does so via the Higgs mechanism, which also predicts that the Higgs boson should interact with those bosons. If this newly discovered particle didn’t interact with the W, it couldn’t be the Higgs! Simple as that. But now, we know that if that were the case, it would be extremely unlikely that ATLAS and CMS would be seeing the results that they are. So that’s probably not what’s happening.

However, just discovering that the new particle interacts with W bosons doesn’t automatically mean that it is the standard model Higgs. There are plenty of theories that predict Higgs bosons, any one of which (or none of which) could be correct. It’ll take many more years of data collection and analysis before we can rule out all but one of the proposed theories.

I leave you with this animation of the signal appearing in the \(H\to WW\) channel at ATLAS, showing how it differs from the expectation based on a standard model without the Higgs, and how including a standard model Higgs boson with a mass of \(\SI{125}{GeV}\) very neatly fills in the gap.