Here’s a tidbit of science that I should have written about a long time ago. Last month, there was a surge of excitement in the particle physics community when the ATLAS detector team announced that they had pretty much conclusively observed the Higgs boson decaying to tau leptons for the first time.

Now, you might be forgiven for thinking “what’s the big deal? I thought we already found the Higgs boson?” Well yes. A year and a half later, physicists are fairly confident that what they found is the standard model Higgs boson. But back in July 2012, when the discovery was first announced, all anyone knew was that ATLAS and CMS had discovered a previously unknown particle with a mass of \(\SI{126}{GeV}\). It wasn’t clear just what kind of particle it was: the standard model Higgs boson, another kind of Higgs boson, or something else entirely. That question would be resolved by gathering more data on how the new particle interacts with other, known particles, and that’s what this most recent bit of news is about.

The Higgs search: a year in review

To understand all this in more detail, let’s back up to about a year ago, when the original discovery of Higgs boson was still hot — well, warm off the presses — and the physics community was awaiting new updates at every conference. You may remember that ATLAS and CMS were searching for the Higgs boson by looking at five channels, or possible ways in which the particle was expected to decay:

These particular channels were chosen because, out of all the particles a Higgs boson can decay into, these are the easiest to detect.

If you look back to one of my earlier posts showing results from all these channels, you’ll notice that, as of about a year ago, none of the individual channels had been detected enough times to be sure (by the \(5\sigma\) particle physics standard) that the newly discovered boson decayed into those particles. In other words, physicists were not yet ready to conclude for sure that the new particle definitely interacts with W bosons. Or with tau and antitau leptons. But each of these channels individually was detected just a bit more than you’d expect without the Higgs boson, so that when you put them all together, it added up to conclusive evidence of a new particle. Once we knew there was a new particle there, though, the focus turned to identifying that particle’s properties. There are several properties that needed to be checked to determine whether the particle is really the Higgs boson: among them are spin and parity, which I’ve mentioned before, but this most recent ATLAS result is really about the interaction strengths with other, known particles. (See the image at right for a handy reference, from Wikipedia.)

There are two major kinds of interactions the experiments have been looking for:

Let’s have a look at the actual ATLAS results released last month.

Most of the paper goes through the details of how the detector picks out the events characteristic of the \(H\to\tlp\talp\) channel, which is a pretty complex problem in its own right. Because tau leptons have an incredibly short lifetime, ATLAS can’t detect them directly. Instead, it has to detect the things they decay into. These secondary decays fall into two categories, leptonic (where a tau decays into a muon or electron) and hadronic (where a tau decays into a whole jet of assorted hadrons). Unfortunately, in both cases, there are many other things going on that can produce the same end result, so it takes some complex computer algorithms to try to sort out which electrons or muons or jets come from tau decay and which ones don’t. All the discussion of boosted decision trees, kinematic reconstruction, preselection, and so on is about that. I’m just going to skip over it.

What I’m more interested in for purposes of this blog post are the final results, as shown in figure 9 from the ATLAS paper: 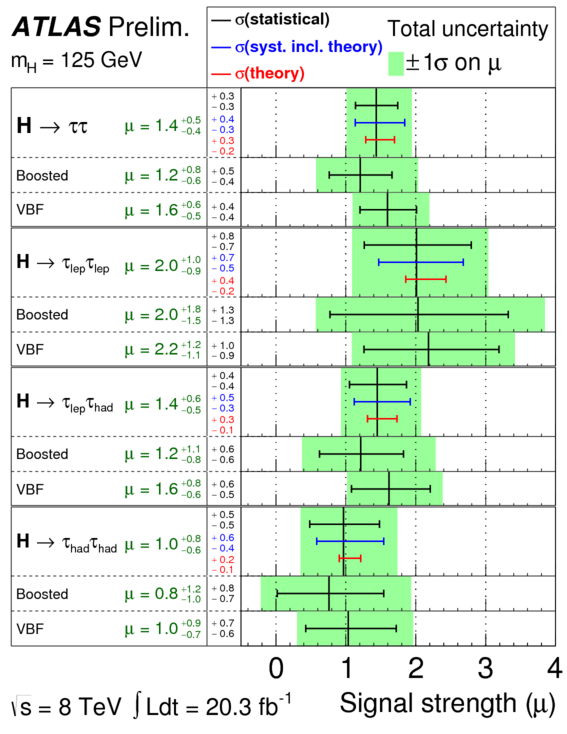 This shows the most likely values of the signal strength parameter \(\mu\), defined as

The cross section \(\sigma^{pp\to H}\) is a measure of how often a Higgs boson is produced in a collision between two protons, and the branching ratio \(BR^{H\to\tau\tau}\) is the fraction of Higgs bosons which decay into tau and antitau leptons. So this signal strength \(\mu\) basically indicates how often the Higgs tau tau decay actually happens relative to how often it’s predicted to happen. If \(\mu = 1\), that means the decay happens exactly as often as the standard model predicts. If \(\mu = 0\), that means it doesn’t happen at all. Based on the figure above, in the very top row, you can see that it actually happens even more than expected: the most likely value after putting all the different pieces of evidence together is \(\mu = 1.4\).

The paper also includes a log likelihood plot in figure 10: 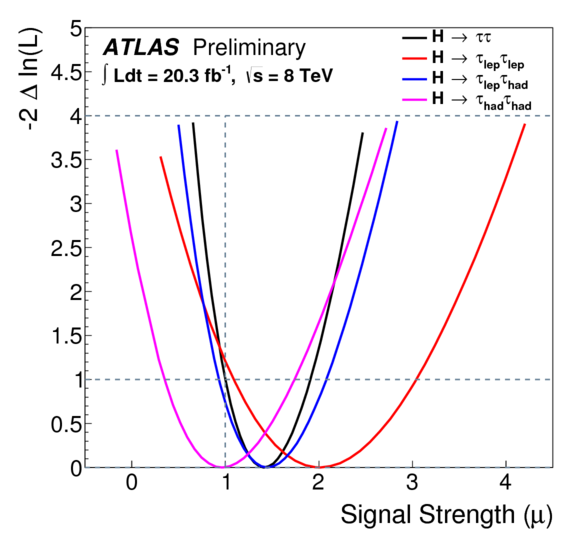 which should look very familiar if you read my post about Tesla fires and statistics! This graph is useful because it lets us see just how strongly the ATLAS results exclude the possibility that the Higgs doesn’t decay to tau leptons at all. That possibility corresponds to \(\mu = 0\). So, as I explained in my Tesla statistics post, you can look at the black curve which represents the log likelihood of the data, follow it up to see where it crosses the vertical line corresponding to \(\mu = 0\), and… well, it runs off the top of the plot. Fortunately, they give us the number: 4.1 standard deviations, which means the black curve crosses \(\mu = 0\) at \(-2\Delta\ln\mathcal{L} = 4.1^2 = 17\). That’s pretty high! It’s not quite up to the \(5\sigma\) threshold (that’d be \(-2\Delta\ln\mathcal{L} = 25\)) that we call a discovery, but it does mean it’s quite likely that the Higgs boson decays to tau leptons. I wouldn’t be surprised if CMS is currently crunching some numbers that, when combined with the ATLAS result, will show conclusively that the \(H\to\tlp\talp\) decay is happening, and thus that the Higgs field also gives mass to fermions.

In one sense, this is an exciting discovery, because it neatly wraps up some outstanding questions about the nature of mass and the role of the Higgs boson. We are now fairly sure that the Higgs mechanism gives mass to all the known fundamental particles that have any mass at all. (I guess there’s still the option of Majorana neutrinos, but that’s an entirely different story.) On the other hand, it’s kind of disappointing. The fact that physics is behaving exactly the way it was predicted to cuts off a lot of theoretical predictions of new things that might have been discovered. The particle physics community will just have to continue waiting to find the next new and exciting phenomenon.